The Korean Products Festival in the Philippines

The Korean Products Festival in the Philippines

The Korean Product Festival for 2017 happened at the SM Aura shopping mall and the SMX Convention Center from July 14 to 16. This three-day festival occurs every year. It introduces various products and brands. The exhibit features banks, kitchenware, household items, technology, skincare, makeup and so much more. There was also an exhibit from a maker of safes. The show has a wide range of the event.

The familiar names here exhibitors like the Philippine K-pop Convention (PKCI) and the Korean Cultural Center of the Philippines. There is growth in the popularity of Korean TV shows and pop music in the recent years. Some of the most popular things here nowadays are Korean food and cosmetics. This event proved that Korea has a lot to offer. 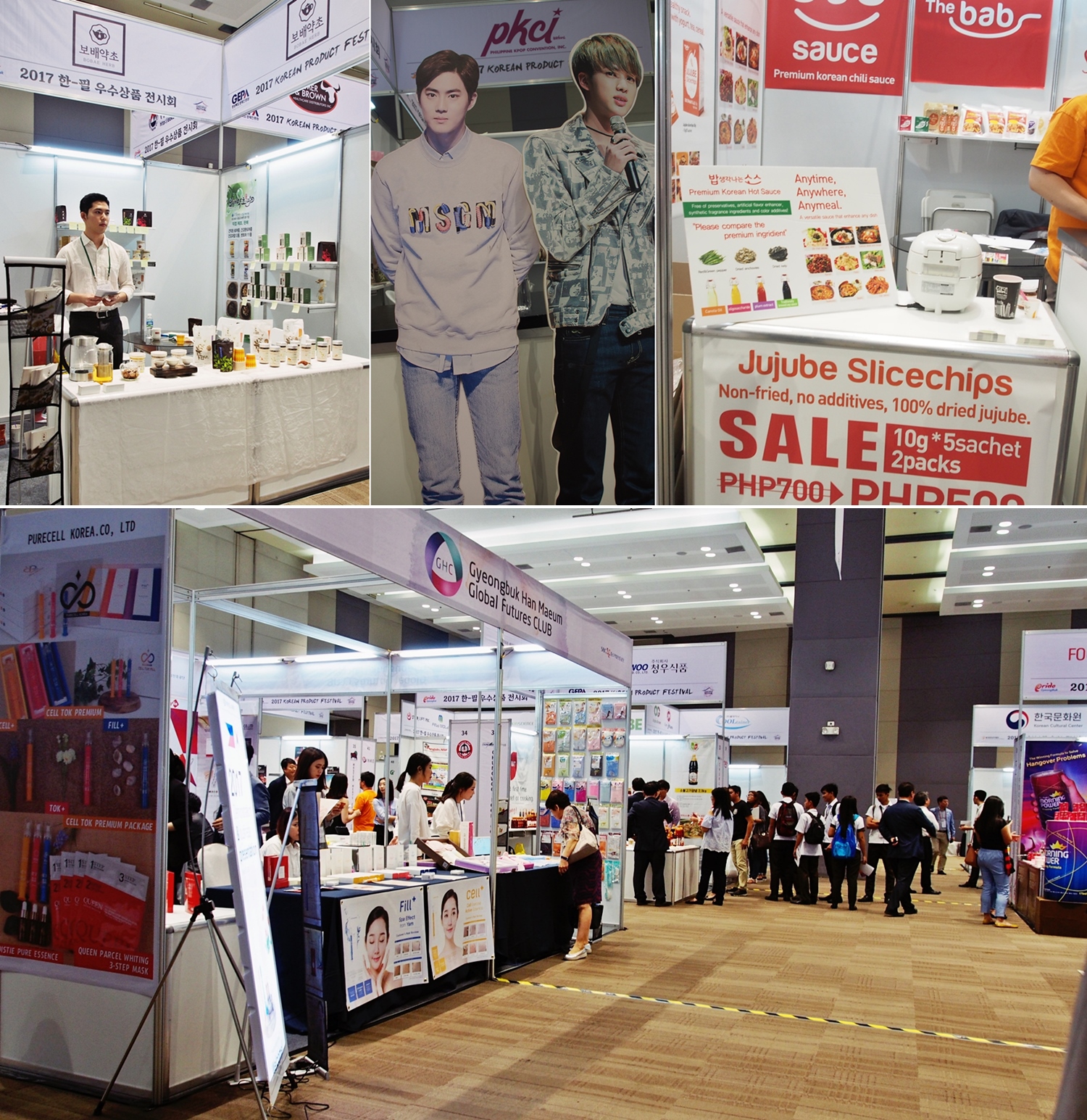 A member of the K-pop group Offroad joined the festivities. The fans were excited after they announced that Park Harang would be a special guest. The people now have an opportunity to see the star. One of the highlights for most attendees is the “fire noodle challenge” with Park Harang.

Some companies who exhibited already have products out in the Philippine market. There were also companies who have been operating for some time. Some brands have not entered the Philippine market yet. They joined the festival to introduce themselves and meet importers. The festival was an excellent way for the businesses to meet other companies so they can work with each other. There is also a lounge area where the visitors may try out some Korean street food. The section also became a meeting place for companies to meet one another. Distributors and wholesalers may even express their interest in importing or exporting their products so they can break into the Philippine market. That is one of their primary goals. 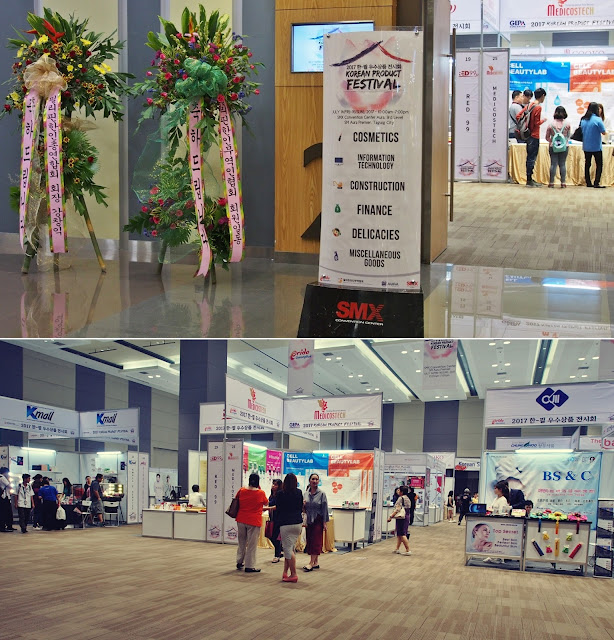 One of the exhibitors was Paul Kang from the Master Meaty Expert. They asked him what he thought about the event. He said, “I think there are two elements for businesses to be successful at this event. Firstly, products must be friendly to consumers. Joining this event will be very effective if the product is relatable to users, like food, cosmetics or beverages since most people visiting the event are average people and not people who are in complicated or professional industries. They want to find potential business partners; it’s important to have accessibility to the Philippine market.”

After asking Jisun Byun what he thought about the festival, he said, “We join a lot of local expos, but this was our first time to join the Korean Product Festival. We thought there would be more Koreans, but it was amazing to see that a lot of Filipinos came and had friendly interactions with the Koreans. There aren’t many opportunities like that. It was special.”

We were able to talk to some exhibitors to learn more about their experiences and businesses. It was great to
know what they do. 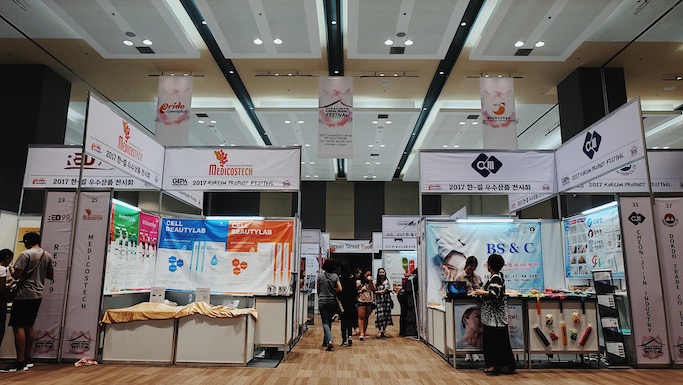 The Barista Academy and the Cooko Culinary was one of my favorites. The Barista Academy is a Korean barista school and cafe with the name Blue Wonder Coffee and Bean Roastery. It opened recently in the Philippines. I also talked to Sunny Byun Jisun, the marketing manager. She said that they offer barista training classes and coffee workshops. Korean and Philippine trainers teach at the academy, The classes may vary from intense hands-on training to lectures. They also provide certification and prepare teh person for the professional field.

“We wanted to present ourselves as a Korean brand, but not be foreign, instead connect the two different economies with a product and service that’s common and friendly to everyone, coffee.”

“When people think about Korea, it’s often about soap operas, pop music, cuisine or traveling. We could say that it has gotten easier to learn about new countries, and a lot of people are getting to know Korea, but for the majority, it’s still very foreign and feels like it’s still not part of the world. So we wanted to bridge that gap. The three managers at Cooko, we grew up in the Philippines, and as a person or as a company we want to be a friend and supporter to the Filipinos by providing quality products, skills, and experiences.”

“We believe that by joining the Korean Product Festival, we got a step closer to our goal. Having made a friend like you who has a similar purpose, we see great hope.” 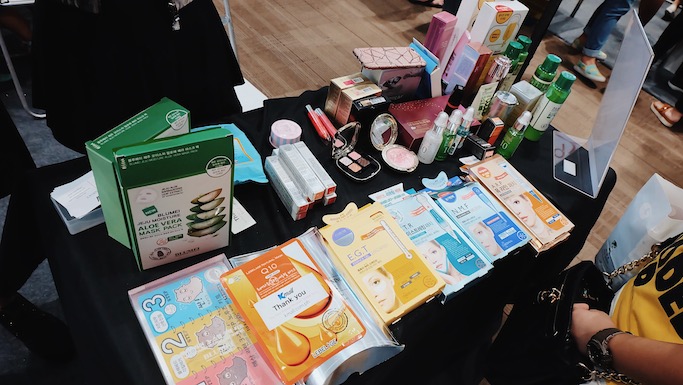 They asked Sunny if the event was a great way to introduce the Korean products to the Philippine market. She said, “Yes, absolutely. Being a Korean, as much as we enjoy and love the Philippines as a second home, we would like to share the good things we’ve got. Experiencing the product is a way of experiencing and learning how we live, how we think and how we develop. That’s how we also learned and experienced the Philippines.”

After coffee, I went to a booth that focused on herbal products, health and teas. It was Bobae Herb. After trying two teas, I found the lotus root effective in cleansing the palate. It wasn’t bitter and it gave a soothing and calming effect. I used to associate Korean teas with ginseng, green tea and barley. After drinking Bobae Herb, I discovered that there are a lot of flavorful and healthy teas. They don’t just sell powdered and dried tea and tea bags. These people also sell more powerful and concentrated tea pills.

Let’s not forget to talk about Korean food that everyone njoys. The Master Meaty Expert booth cooked some delicious samples. Their aroma just calls out to anyone. This company is family-owned. They recently renamed it to Kevin Best Food Corp that operates since 2006. It supplies a variety of Korean markets and restaurants in the country. The son of the owner is Paul Kang. According to him, they use local pork but their cuts and marinade is what sets them apart. “What makes Korean food special is the gochujang red pepper paste and what you eat it with, like kimchi and lettuce to make a sam wrap, and soju.”

According to Kang, he was just a student at the Master Meaty Expert when it began. Naturally, he didn’t have enough idea about food. When he grew older, he became more involved. He even thought about ways to grow their family business. Kang graduated in entrepreneurial management from the University of Asia and the Pacific in the Philippines. He became equipped with additional knowledge on how to approach the Philippine market. Kang was highly knowledgeable about the Korean cuisine and his products. He even provided a catalog of Korean meat. This made me really hungry. He had items in a freezer and most of his products became sold out. That only shows that people love the flavorful Korean meat.

Purecell was the first Korean cosmetics booth that I visited. They have a skincare line called MOistie. They wanted to look for a distributor in the event so they can release their products in the Philippines. They also want to talk to the customers directly. Their products were intriguing especially the Mostie Cell Plus that has a “micro needle ampoule.” The concept was interesting. The staff put it in comparison to a Botox injection. However, it is hassle-free and less painful. Plant-derivative extracts are the active ingredients. They are fermented in a “micro needle” that is why it treats and penetrates the skin after an application. I tried it and it felt like a normal essence or serum. After massaging it on the skin, you can feel something pricking your fingers. These “micro needles” may feel odd at first but they are very cool. The products are hypo allergic and cool because they are plant-based. They may carry a three-step face pack for people who are on the go. It has the face mask, cream and ampoule all in one. Most of their products look promising. They all claim to have moisturizing, anti-aging, and brightening effects.

Korbeauty, a Korean website that sells makeup and skincare brands, launched its online shop on the first day of the exhibit, July 14. It chose to feature and sell products that have proven to be of great quality. The brands at the website may not be familiar, but that’s because the store hand-picked the companies that are well known to professional makeup artists and actresses. The online store also took note of the concerns of the Filipino in terms of skincare and makeup, taking note of what products work best in the country, especially during the summer when it’s humid. Some of the products were sold out during the exhibit. Even though this was a new company and considering it was its first time at the Korean Product Festival, the online retailer was warmly welcomed by the other attendees.

The PKCI or Philippine K-pop Convention participated in the Korean Product Festival. The company promoted their event and drew interest from followers who are K-pop enthusiasts. They were also able to meet potential sponsors for upcoming events.

It was the first time I attended the expo and I had a wonderful experience. Talking to people behind the companies was informative. This allowed me to know more about their brand and why they wanted to establish it in our country. This can make anyone more curious.